I’m back today with a story about the little ikea chest of drawers that could.  After about 4 months, several face-lifts, and a new set of legs she’s ready for her debut! Follow along as I show you how we transformed the Ikea Rast into a fancy new nightstand. 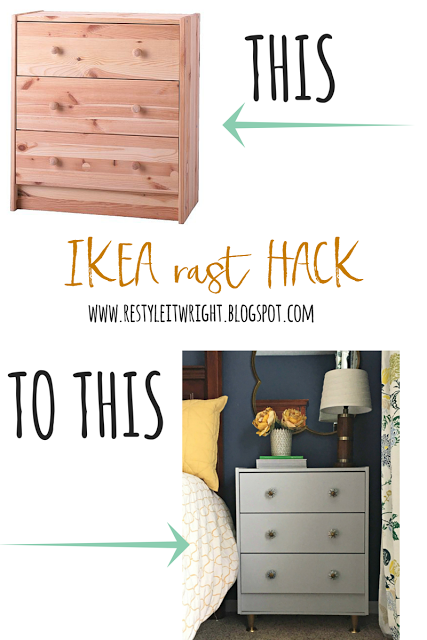 So if you’re a pinterest-er like me (I mean really who isn’t?!) then you’ve seen oodles of rast hacks. From fabric covered to nail head trim to a simple stain, there are endless possibilities out there in the blog world for this mighty piece of furniture.
At $34.99 this pine set of drawers is a blank slate just waiting for some creative love! 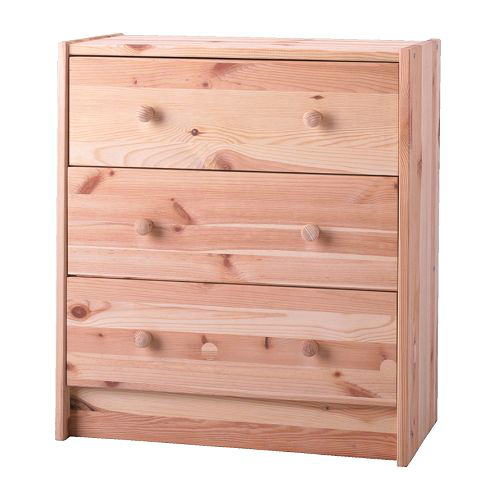 I was on  a mission to find matching nightstands that were inexpensive and chic and just the right height. Sound easy right? Not so much.  I struck out in every “nightstand” search so I decided to go the ‘ol DIY way!  My original plan was to stain the pine wood and add some fancy gold hardware. We had just installed this curtain rod from West Elm and I wanted to mimic the look.

After assembling (super easy) I headed to Sherwin Williams for a custom stain. I had decided that I wanted more of a light grey stain as opposed to matching the curtain hardware (i know, crazy mind changer here). I pre-stained and applied the stain per manufacture directions and was excited to revel in my glorious new nightstand. EPIC FAIL. 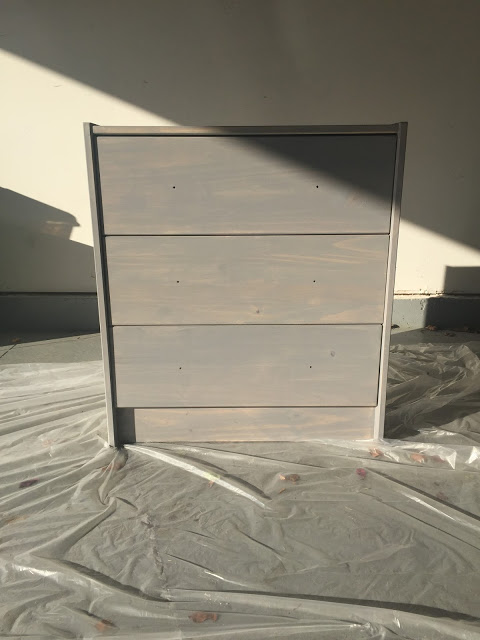 I HATED it. It came across as a bluish hue that was all wrong. Of course I had already stained both sets of drawers before deciding I hated it. So, back to the drawing board I went!
I knew I wasn’t going to re-stain, and I wasn’t going to get new ones, so my only option was to paint! So I headed to my local hardware store to grab some powerful stain fighting primer (I use Zinzer) and got to work priming.  Blame it on the fumes but I have no picture of the primed nightstands but you can imagine…they were all white. Nothing fancy. Bonus: it only took one coat of primer!
Now what the heck was I going to do? I had them primed but zero clue what color I wanted them.
These were the colors I was already working with in the room. A dark blue wall color (distance by sherwin williams), graphic floral curtains (anthropologie), and a neutral duvet (west elm). 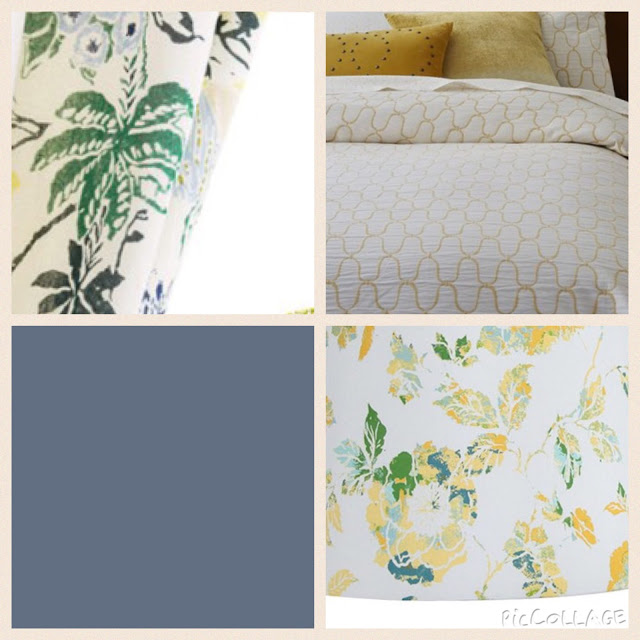 I debated going with a Kelly Green but since I had already failed on this once, I decided to play it safe and chose a neutral. I went with Behr’s Silver Bullet. It’s grey with a just a hint of light blue. 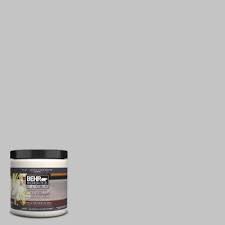 Once both coats of the new paint color were applied and dry, I protected the tops with a clear polyurethane.  And I may or may not have had a glass of wine at this point.

I brought them in the house and plopped them next to the bed and held my breath the color would look okay. Big sigh, they looked great! 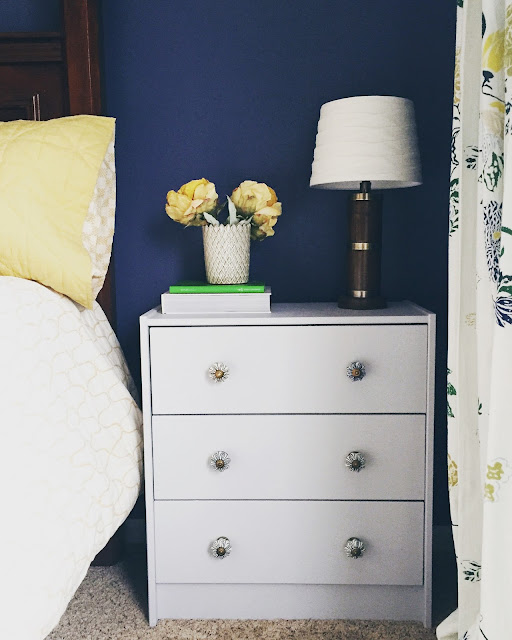 Now let’s talk about those knobs.  I originally wanted gold pulls, however, once the drawers were painted I went a different direction. The best laid plans right?
I spotted these beauties at Anthropologie and swooped them right up. They added character and charm to the piece with just a touch of gold.  They were $8/knob and I needed 12 so that added up to not cheap but what hardware is?! 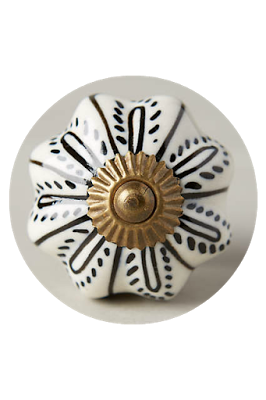 So that’s it right? We’ll call this project done!
NOPE! Not in this house! After living with the nightstands for months I decided it needed a little something more.  They just didn’t feel quite right yet. An idea popped into my head to add feet to make them a bit more sturdy and substantial. The rast sits at 24″ high as it is, but I knew adding another 4″ would still be okay.
So, on to google I went searching for furniture feet. Lemme tell you, this was an extensive search because there are millions of options and price points. I finally narrowed it down and selected these 4″ legs from amazon. $17 for 4? SOLD.

I wanted gold, of course, but with a can of spray paint I knew that would be an easy fix. So in the to cart they went!
Once they were delivered I got right to work spraying them. Luckily the bottom piece unscrews from the top so it made for an easy and clean spray paint job. 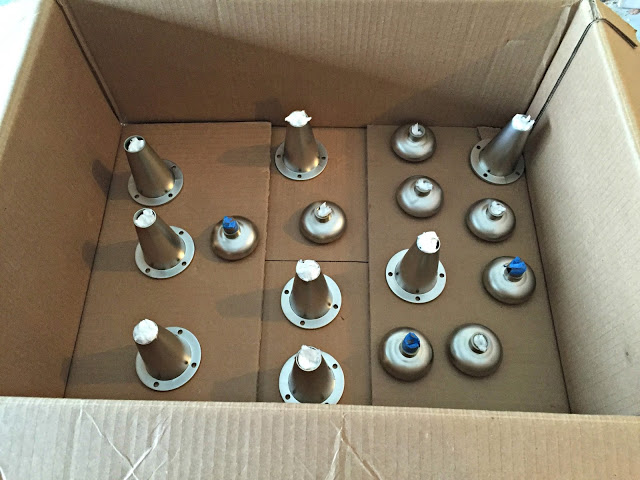 I was so exited to put these beauties onto the nightstand! Flipped the nightstand over and…..crap.
You’d think the bottom of the nightstand would be flat right? Well, it isn’t. Its a hollow pit.  *hanging head in shame* It has been so long that I assembled the piece I completely forgot!
So I put the husband on this job because, well, I was over it.  Here’s a depiction of what the bottom looks like, from another ikea rast nightstand. 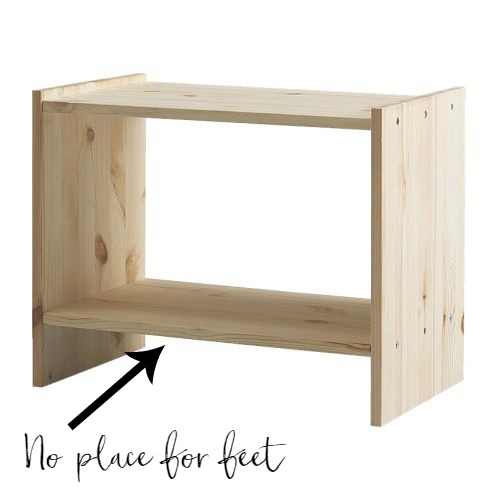 He rigged something up that included attaching a thin piece of plywood from the hardware store to the bottom, which took him all of 5 minutes. I painted the exposed wood in the same Silver Bullet and then we attached the legs. 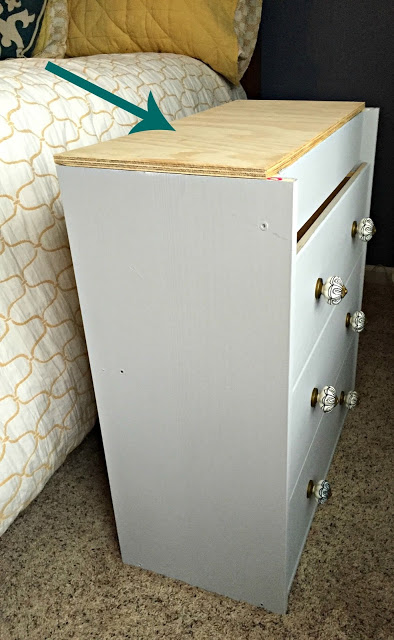 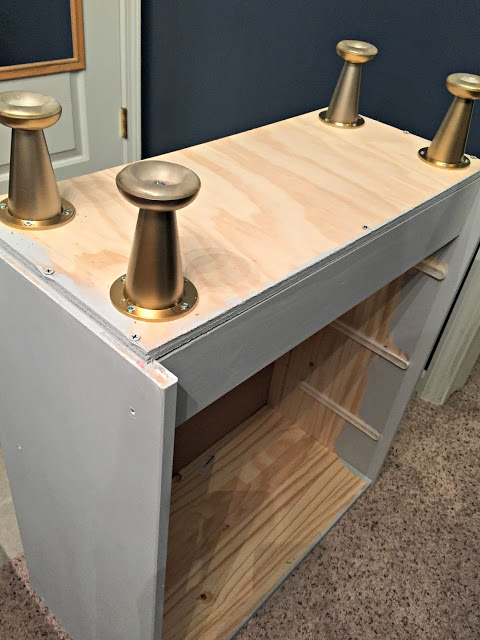 Then we flipped it over and the choir sang. It worked! Suddenly this chest of drawers got a little more fancy…and what’s not to like about that?
Now let’s see how she looks…all gussied up. 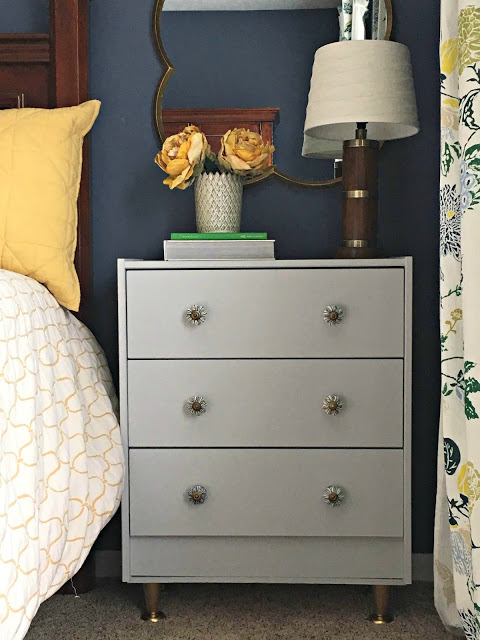 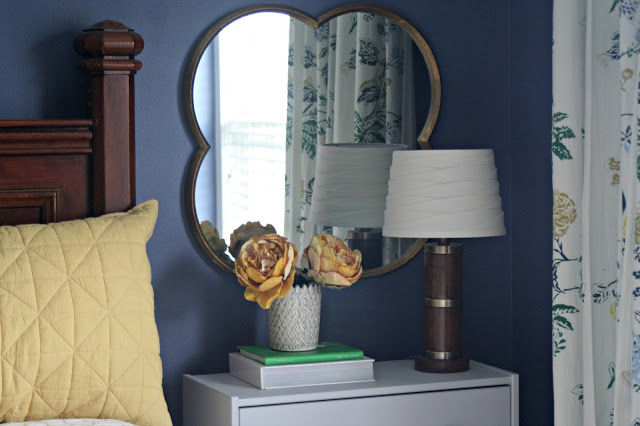 And how about a before/after? 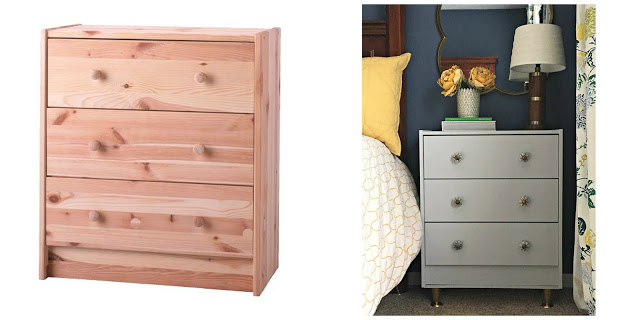 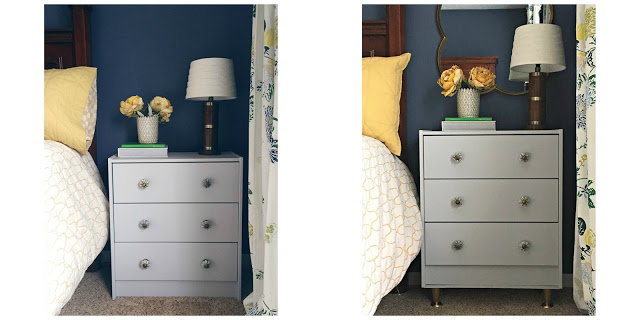 This RAST just got a whole lot fancier! Each dresser came in just around $100 each including the legs and knobs. I of course didn’t factor in the stain that was a no go. We also had the primer and spray paint on hand.  The piece of plywod used added to the bottom was about $5.
Even though this wasn’t your ideal DIY, it all worked out and we have some fun and functional night stands. That’s 6 drawers of storage combined!

Anyone else have a DIY disaster that turned out great with a little elbow grease and some patience? 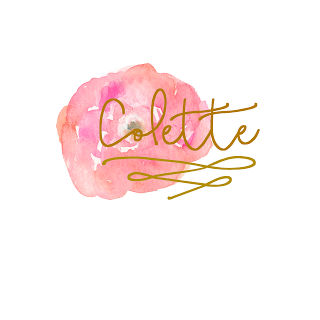